Mac mini hosting: The State of the Mac mini October 2009

Unofficial, but probably quite accurate

A year ago, we wrote The State of the Mac mini 2008. Take a look and you'll see that it turned out to be quite accurate. We nailed the RAM, the GPU, the firewire, and the mini Displayport. We even got the Dual HDD right, even though we had quite a few people disagree with us on that. The one thing we missed was a black/aluminum color scheme.

And now, with new Mac minis upon us, we felt it appropriate to pen another piece. So, here is the State of the Mac mini 2009

We've already secured the new 2.26 and 2.53 Mac minis and taken them apart a couple hours after they were announced. Inside, they are designed the exact same as the previous models, just with the upgraded processor and RAM. (see pictures of the last generation minis here)

There is one thing to note that most people don't know. The Mac minis are officially sold and supported to use 4GB of RAM. However, with that last Mac mini firmware upgrade, they will now support 8GB of RAM. These new minis already have this firmware applied.

The more exciting news from yesterday is the new Mac mini with Snow Leopard Server. This machine omits the optical drive and instead offers two 500GB drives for a total of 1TB. Also included is Snow Leopard Server (usually $499) and 4GB of RAM.

We have a few thoughts on these new minis:


So, how about some pictures?

The Mac mini server comes in the same size box, but a couple differences on the front. First, it reads "1TB Server" underneath. Also, I noticed that the picture of the mini is taken from a slightly higher angle. I suppose it adds a little something more than a slot-less front with two black dots. 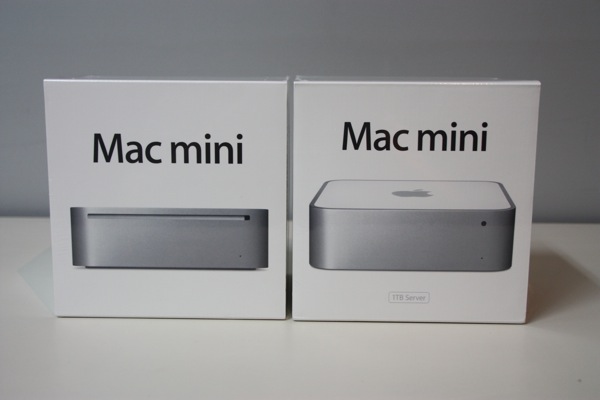 Here is the back, touting the features of Snow Leopard Server 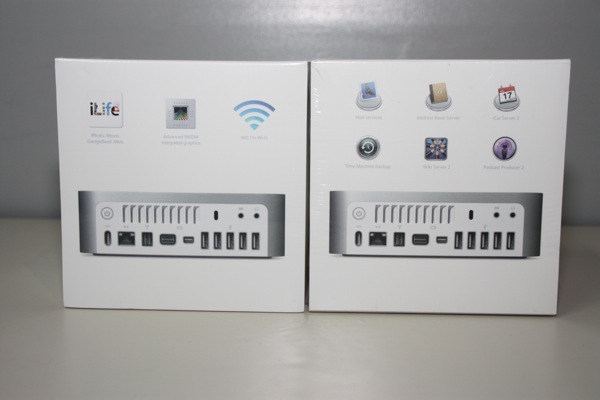 The box contains all the same things as the last generation, and is packed the same way. 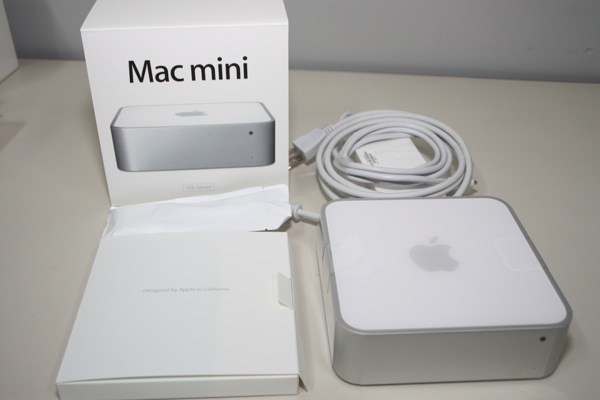 However, they crammed the Mac OS X Server "Getting Started" manual into the same document box as before. Doesn't quite fit in there so it bulges a bit. 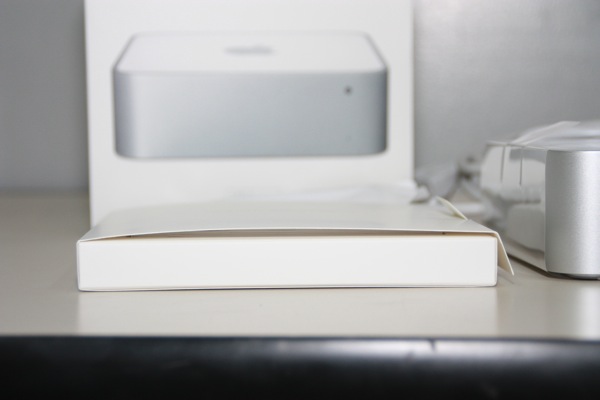 Here it is next to the 2.53 Mac mini, also introduced yesterday.

When you take the top cover off, you see the main difference. Instead of an optical drive, it's the second hard drive sitting there right on top. 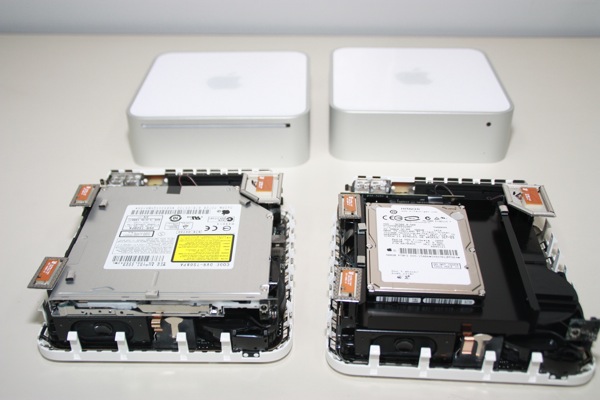 Otherwise, all the same antennas are all in the same places. (Having no optical drive does make it easier to get to that bottom, right hand screw.) 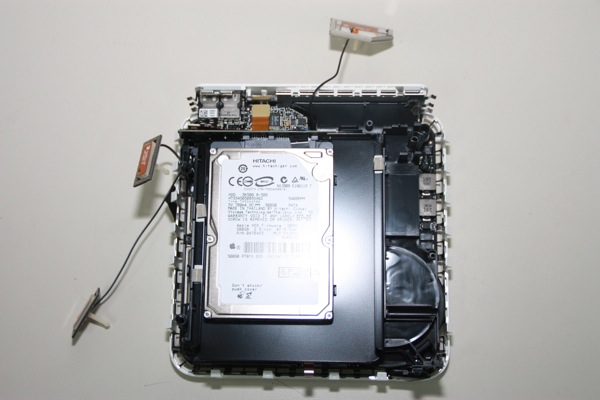 Here is the top part removed, containing both drives, the fan, and the speakers. 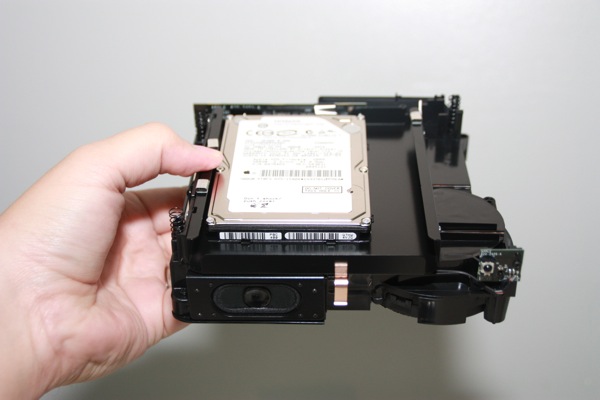 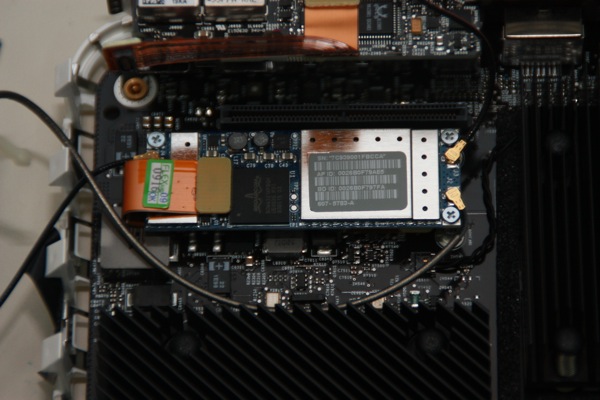 The top drive is laying in a metal sled of sorts. 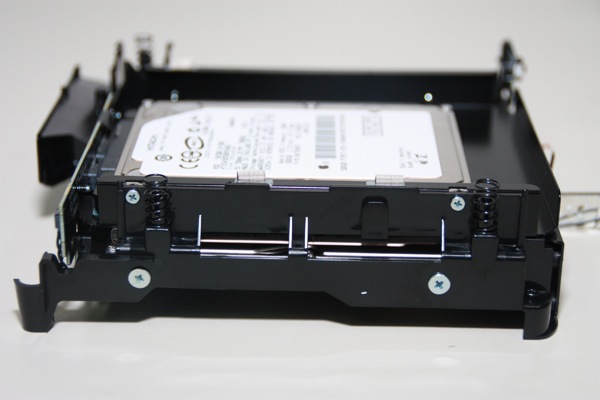 It's held in place with six screws 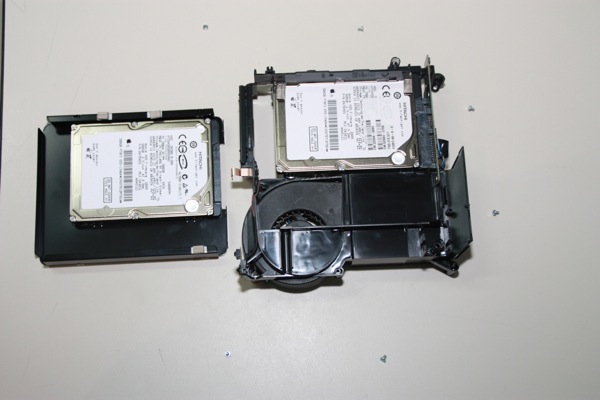 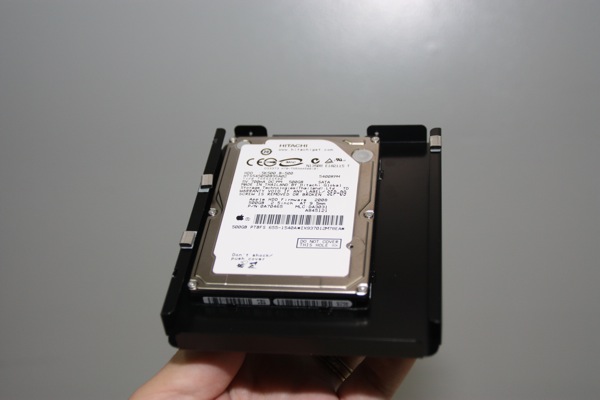 It slides back in place, connecting with a standard SATA connector. 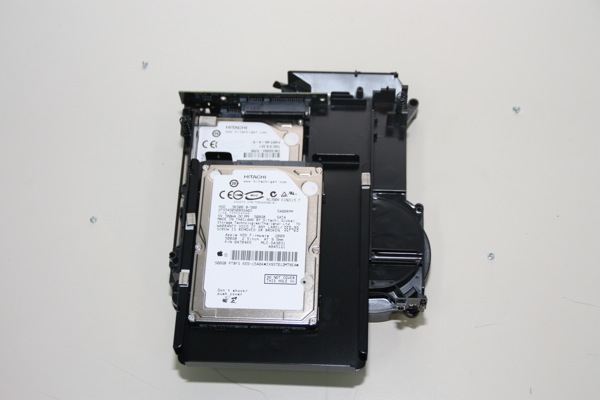 The OS startup is the same as a regular install of Snow Leopard Server. The drives are configured as two separate drives. By default, the OS prompts you to host your services on "Server HD" and backup your client data to "Macintosh HD2" (Sorry about the "camera pictures of a screen." Can't take screenshots yet in the setup.Update: You _can_ take screenshots in Server Assistant, as of Snow Leopard. The images get put in /var/root/Desktop/. 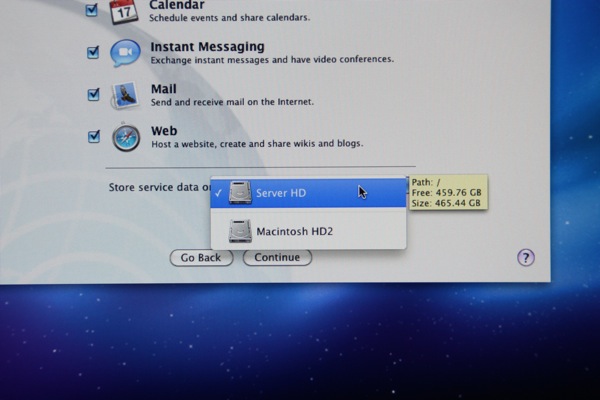 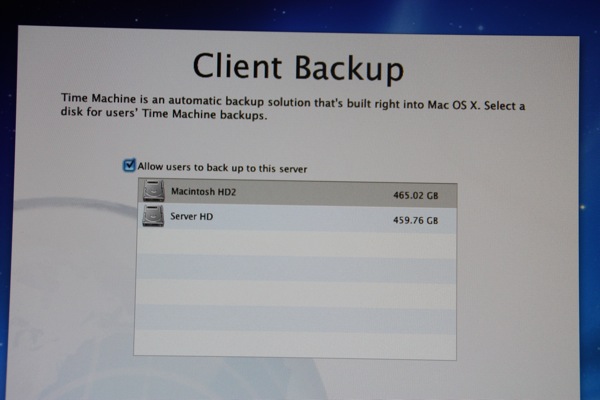 If you choose to use the Standard setup, all of these services are configured right out of the box. Very simple, even if you don't know what you're doing. To turn any service off, it's just a flip of a switch. 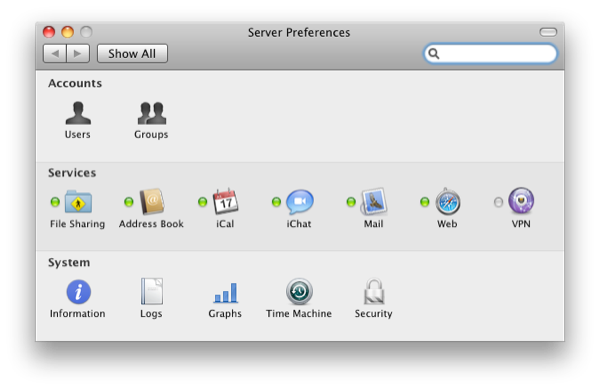 Here are the two separate drives as seen in Disk Utility 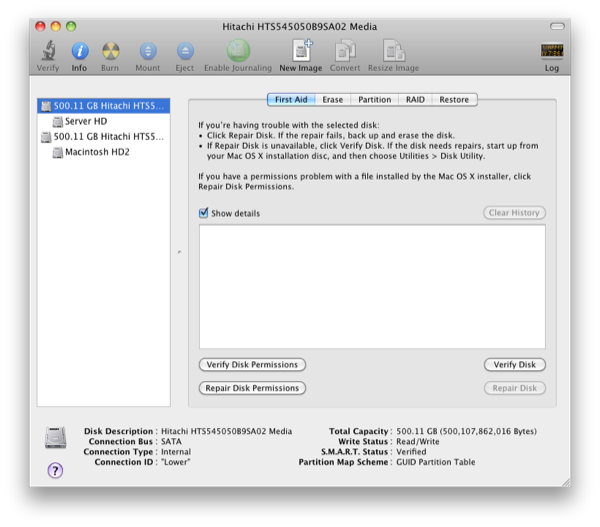 All setup now so the mini goes out to pasture. Slotless, but among friends. 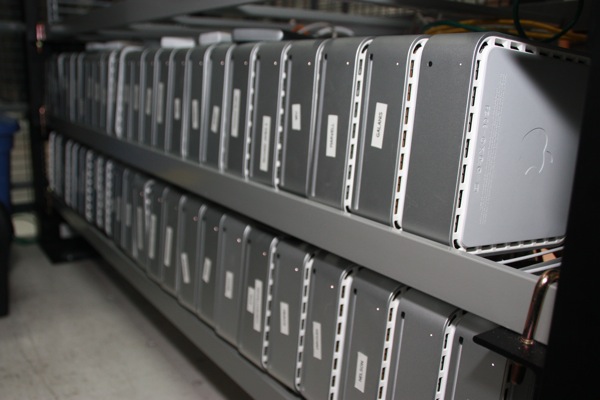 The Future of the Mac mini


It's difficult to predict the next revision of the Mac mini since these were just released. However, we're confident there is a long road ahead yet. This comes from a couple of factors.

First, it's an incredibly useful machine. From our research, it sells much better than people think. (Look in the Online Apple Store. It's a better seller than the Mac Pro, yet no one fears a Mac Pro demise.) There are so many great uses for the Mac mini. Just recently, the Wynn and Encore here in Las Vegas put new minis into all of their checkout counters. Their last consoles weren't powerful enough to run their newest check-in software and the Mac mini handled it easily.

Second, we have very informed little birdies whispering in our ears all the time regarding the Mac mini. There are a lot of people, both inside and outside of Apple, that like the service and want to help us keep our business on the right track.

If you have any other questions, feel free to get us on Twitter @macminicolo

And that's the (unofficial) state of the Mac mini.


About Macminicolo
Macminicolo, a Las Vegas colocation company, has been hosting Mac minis since their introduction in January 2005. They are the leaders in this niche market and are known for their personal service. They currently host hundreds of Mac minis for satisfied customers located in 36 different countries around the world. Get more info on our frequently asked questions page.