We took apart the last two Mac minis (1,2) and those posts were quite popular. We thought we'd give it another try to see what we can learn. The Mac mini is an incredibly powerful server with a low price. Colocating with macminicolo.net allows your Mac mini to be used worldwide with stunning speed and security.

So, enough with the sales pitch. It took an extra day to get the new Mac mini with Snow Leopard Server in stock but the local Apple store called this afternoon and let me know they had one ready. So, after a quick trip downtown to the Las Vegas Strip, here is the Mac mini unboxing and quick look inside. All the images are clickable to bigger images. Hopefully you'll find something we missed and we can add it.

The New Packaging
The packaging for the new Mac mini is quite a bit smaller. I suppose pictures show it best. 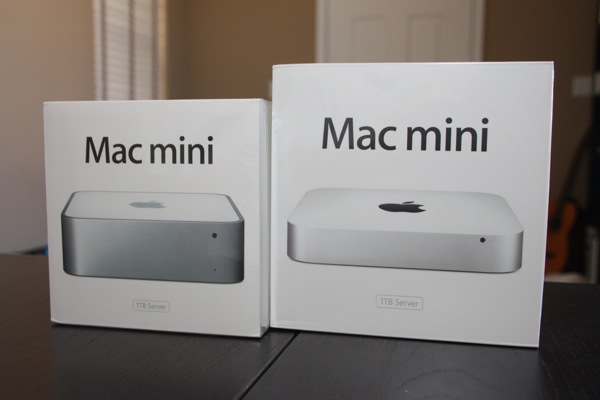 You slide the box from the top and see the Mac mini sitting there first. Two thoughts: 1) This is the first time the documentation wasn't used for padding above the mini. 2) This new aluminum is so much better looking than the white plastic. 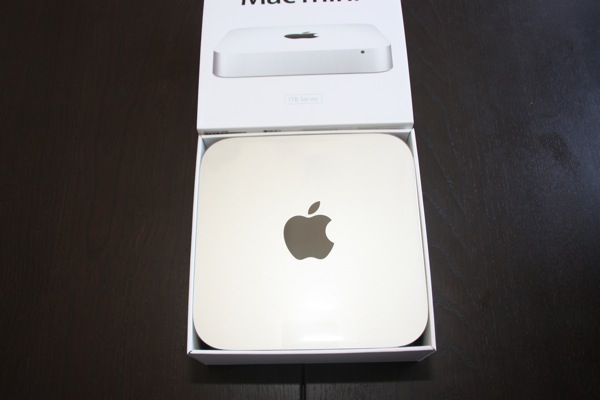 The documentation and the power cable is found underneath.

A couple shots to compare it with the last Mac mini with Snow Leopard Server. 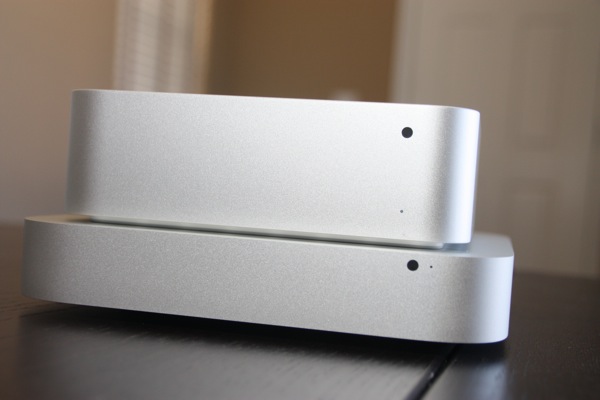 Let's Get Inside
To open the bottom, you just twist the black circle half an inch, then press down on one of the sides to pop up the opposite side. It's not the heavy rubber like the bottom of the Time Capsule. It feels more like hard plastic.It keeps the machine slightly elevated from the ground as that is where the air intake is for the fan. 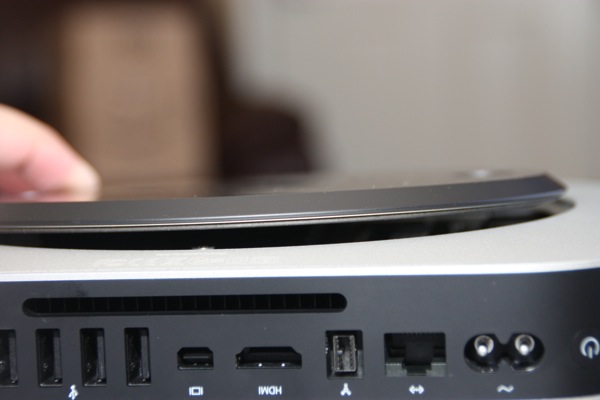 Immediately you see the RAM, which is very simple to replace. Just pull back the metal clamps and it pops up. 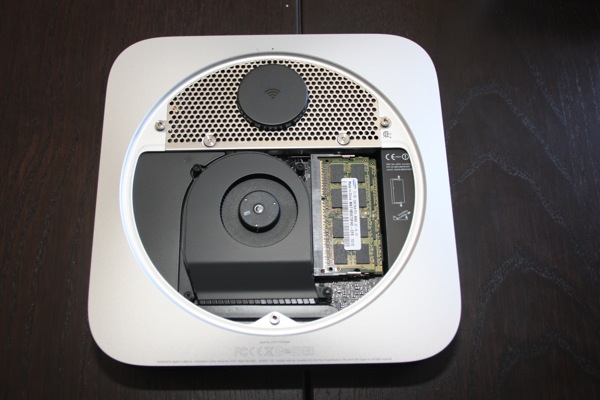 If you remove the vent, it takes four screws then slides down and flips up. 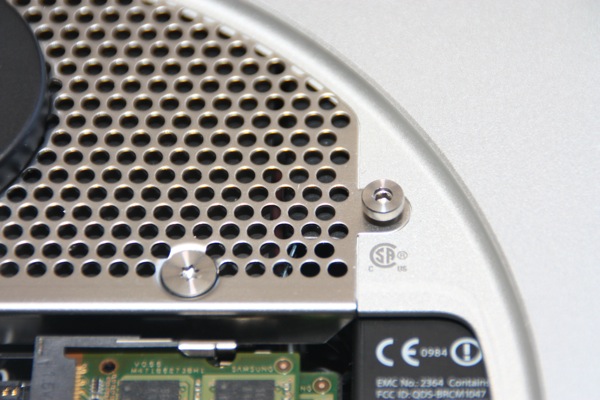 You'll also need to detach the cable to the Airport antenna. Really strange they put the antenna on the bottom instead under the Apple on top. It turns out, there's just no room up top. The optical drive (or second hard drive in this case) is flush with the top of the unibody case.

It's four screws to remove the fan. The hot air is released out of the back. 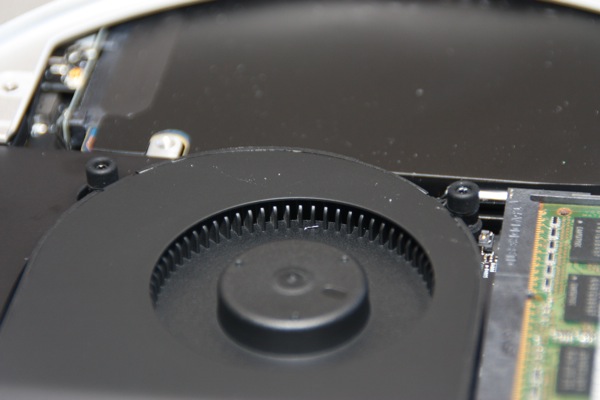 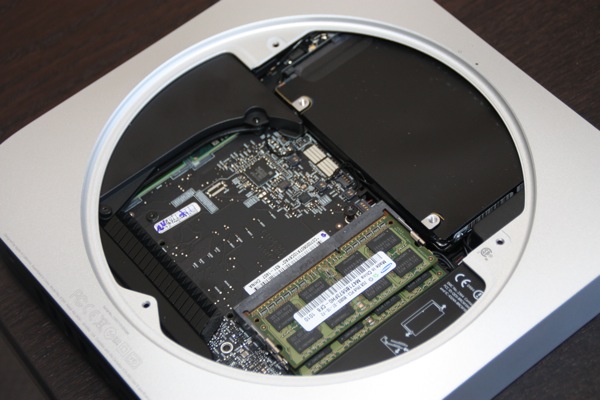 From there, it takes the removal of just one cover to get to the first hard drive. The second hard drive is quite a bit more buried. 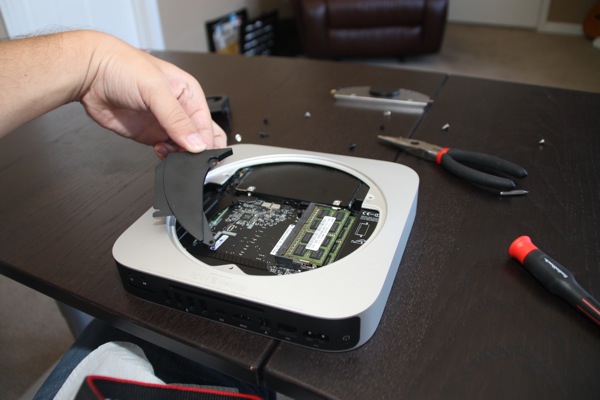 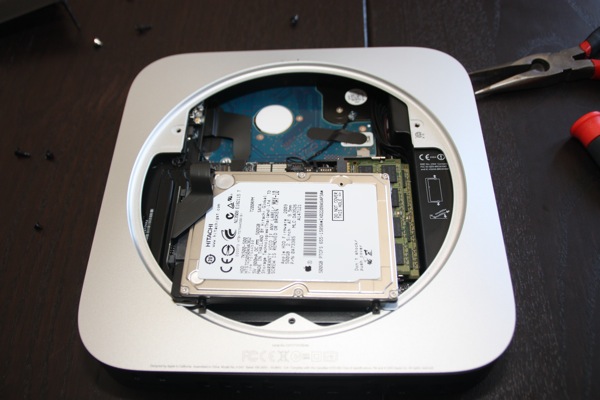 But you can pull the logic board out and get to it. 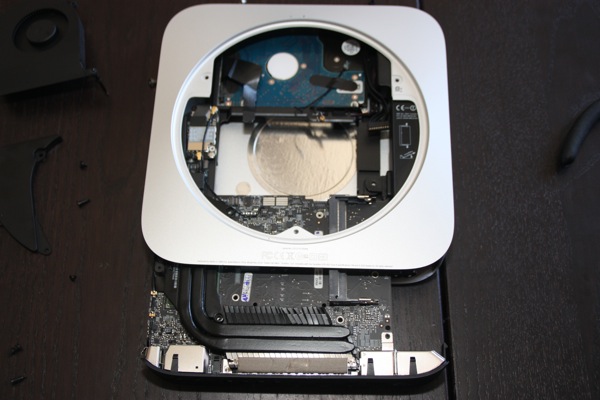 Here are a few more pictures of the inside parts. 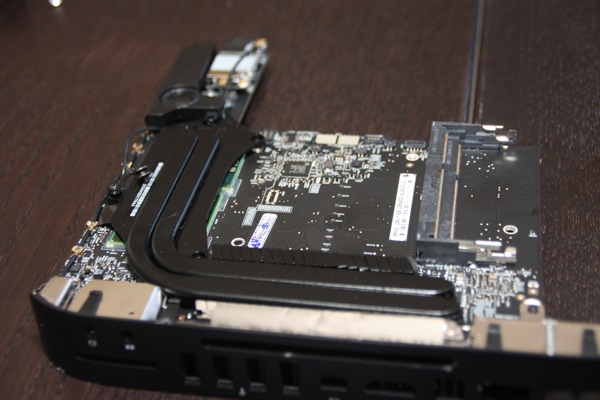 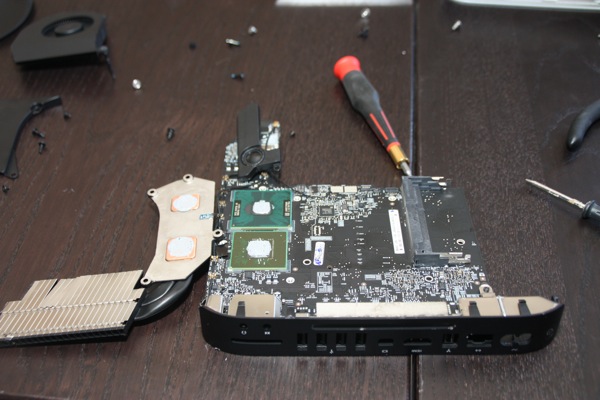 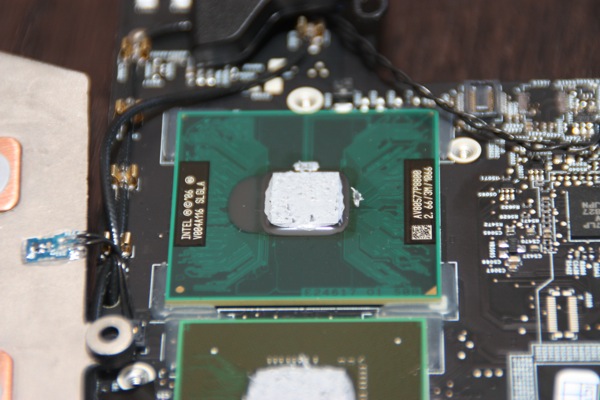 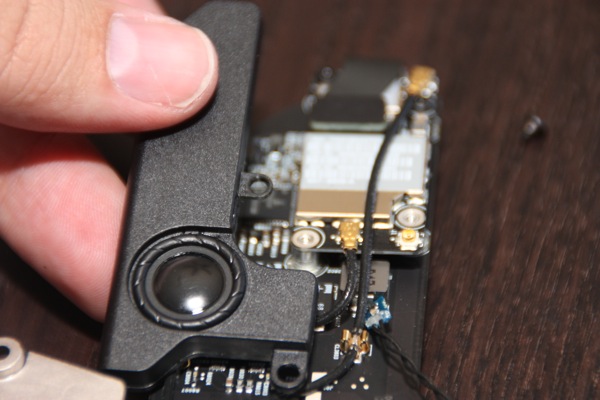 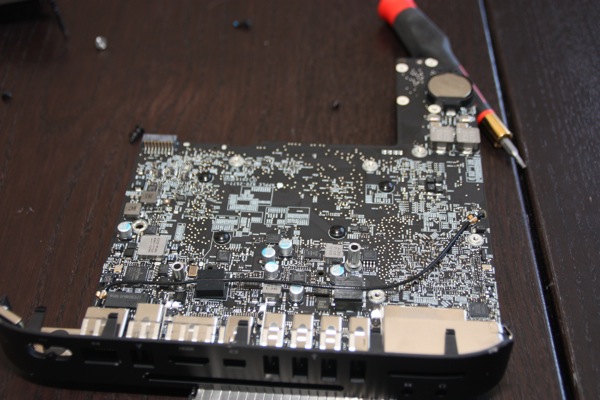 Three notes from the tear down: 1) The screws are tiny. In other words, most people won't be able to do this with what they have in the garage. 2) The CPU was really in there tight. I tried to pry it off with no luck. 3) This Mac mini is really, really well built. It feels like less of a brick (like the last one) and more of a laptop without a screen.

Well, those are the main parts of the new Mac mini.

We're going to get right to work on benchmarking this Mac mini in server performance. The last version was solid and performed well. With the officially supported 8GB of RAM, and the faster hard drives, these Mac minis should make even better servers.

If you'd like to keep up on the benchmarks, keep up with us on twitter here. Also, if you are able to spot anything from the pictures that can be added, please send us an email or a message on Twitter.

If you want a look at the new Mac mini with optical drive, ifixit has done a great (and prettier) teardown here.


About Macminicolo
Macminicolo, a Las Vegas colocation company, has been hosting Mac minis since their introduction in January 2005. They are the leaders in this niche market and are known for their personal service. They currently host hundreds of Mac minis for satisfied customers located in 36 different countries around the world. Get more info on our frequently asked questions page.