As you can imagine, we were happy to see a new Mac mini get announced this morning. The Mac mini is an incredibly powerful server with a low price. Colocating with macminicolo.net allows your Mac mini to be used worldwide with stunning speed and security.

So, enough with the sales pitch. We had a call from the Apple Store first thing this morning saying they had a mini for us. (The Business Consultants there know we really like our minis.) So, here is the Mac mini unboxing and quick look inside. All the images are clickable to really, really big images. Hopefully you'll find something we missed and we can add it.

The New Packaging
The packaging for the new Mac mini is quite a bit smaller. Apple says it is 31% smaller. Below you'll see it compared to the size of the software box that Leopard comes in. They have this Mac mini box wrapped in cellophane. I've seen that done with Mac minis bought from Best Buy, but never from the Apple Store. 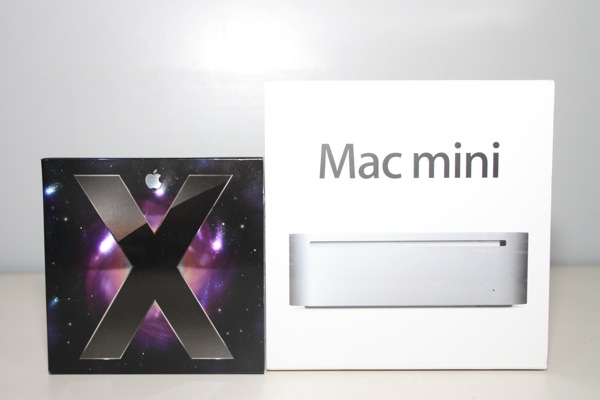 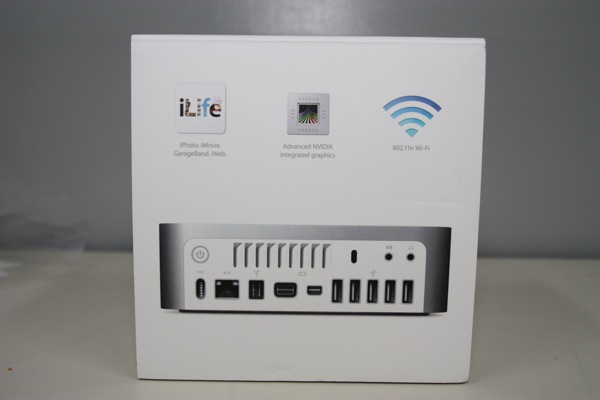 Also missing from the box is the handle that used to be on top. Surprisingly, without the handle the box seems a little heavier. I suppose it's because it's not as easy to hold in the hand.

Another strange thing is that the Mac mini has 10 vents on the back, but the box only shows 9 vents on the back. (Arn at Macrumors pointed this out to me.) Opening the box used to be from the top, but now it slides out from the side. You are immediately greeted with the familiar "Designed by Apple in California." 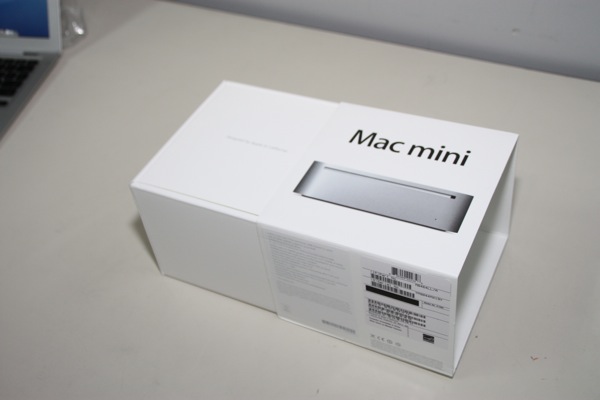 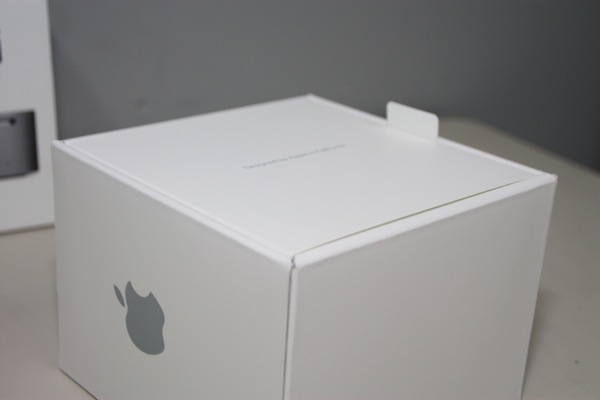 The Mac mini itself has very little padding on the sides. In the last package, it was surrounded by styrofoam. 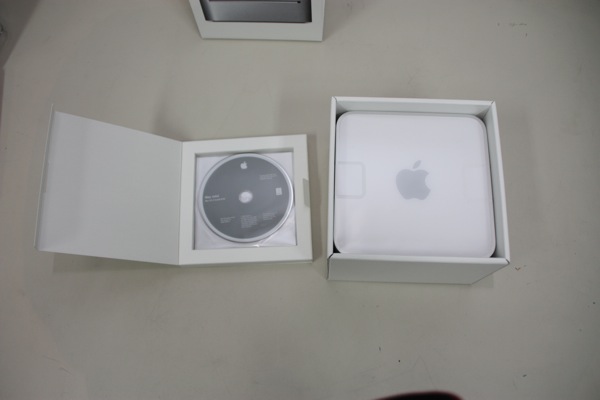 Under the Mac mini is one more cardboard box to pull up. Below that is the familiar power adapter, the AC cord, and a mini-DVI to DVI adapter. This will make it much easier for people to use their existing displays since the adapter is included. I was happy to see that the power brick no longer has the sticky wrapping on it. I can't tell you how many Mac minis we've received with the wrapper halfway on still because they got tired of picking it off. 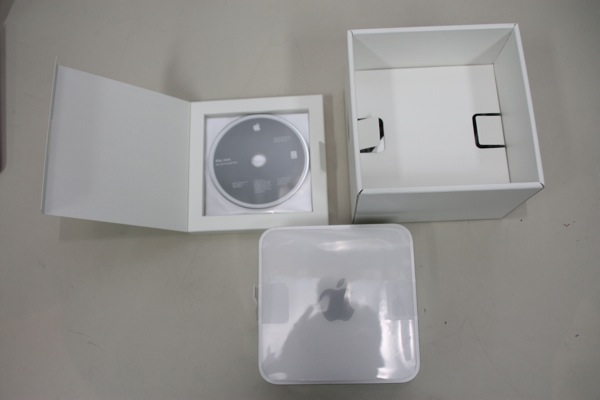 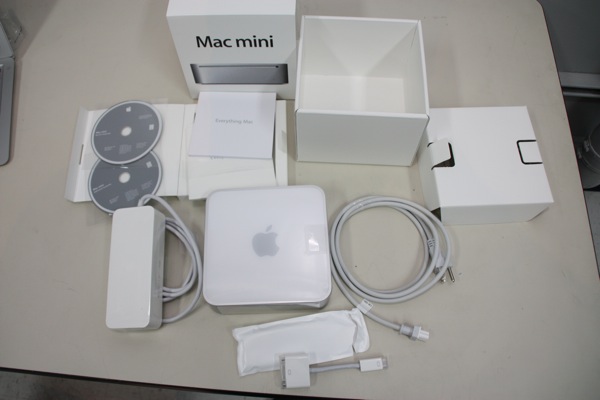 External Views
The outside of the Mac mini looks nearly identical. It has the same aluminum siding and the white plastic top. I guess I can't prove it, but having handled several hundred of the last generation Mac minis, the aluminum feels different. Perhaps it was manufactured differently. (Though I doubt it comes from a single block of aluminum.) Below is a little Mac love with the previous generation on top, and the new version on bottom. 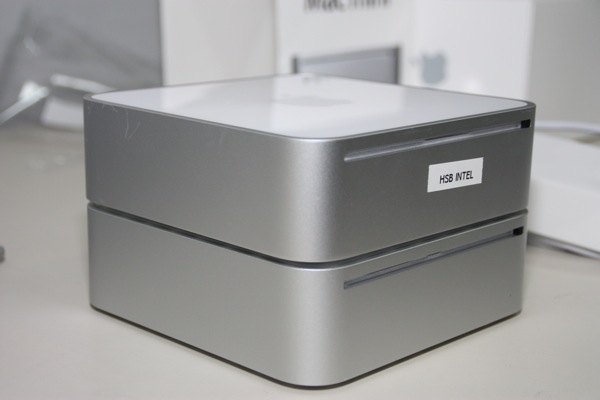 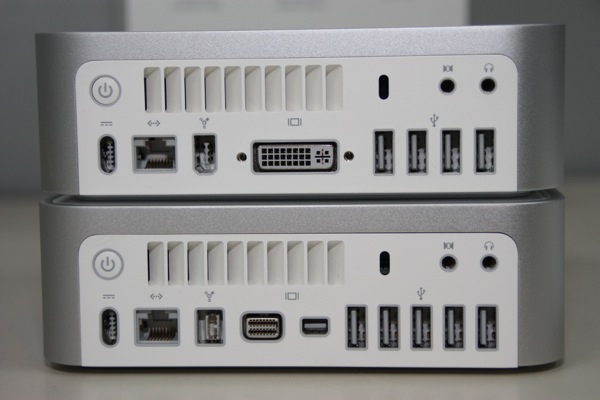 Taking A Look Inside
I don't know hardware components as well as the guys at ifixit.com, so I'll leave the in depth disection to them. However, I've opened up so many of these Mac minis I have a good feel for what has changed.

Luckily, they can still easily be opened with a putty knife. 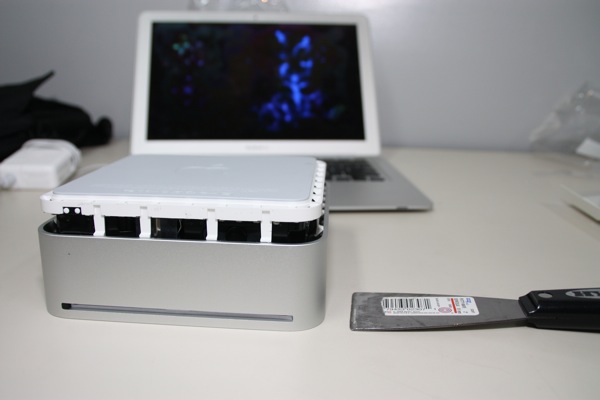 However, one used to have to disconnect a cable on the front right corner. That is no longer there. 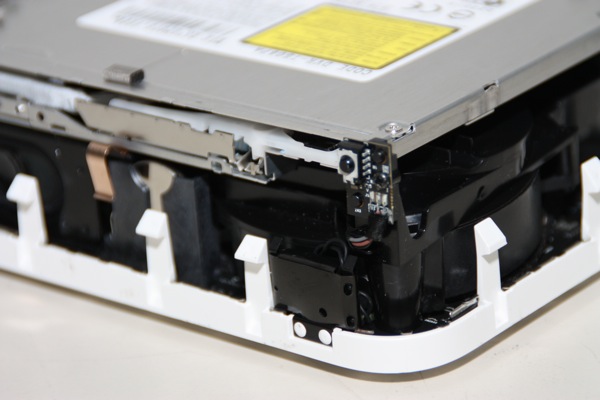 The screws are on all four corners still. There are now three antennas. From what I can tell, the back right is still Airport and the front left is Bluetooth. There is an extra antenna on the back left which is a second Airport antenna. 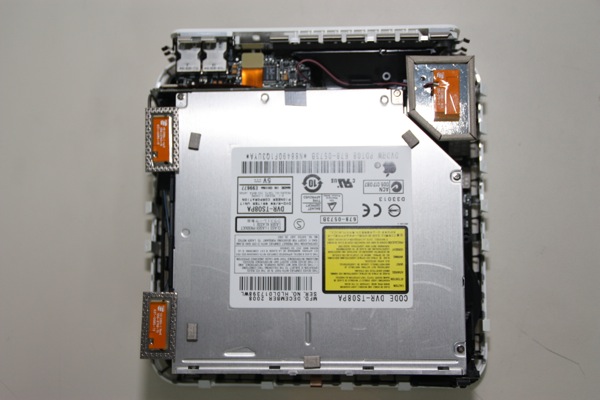 On the last version, you just had to remove the front right power cable to remove the top section or it would disconnect as you pulled. Now, there are three cables that will disconnect if you pull straight up. Instead, remove the antennas from their place holders and angle them from the machine. 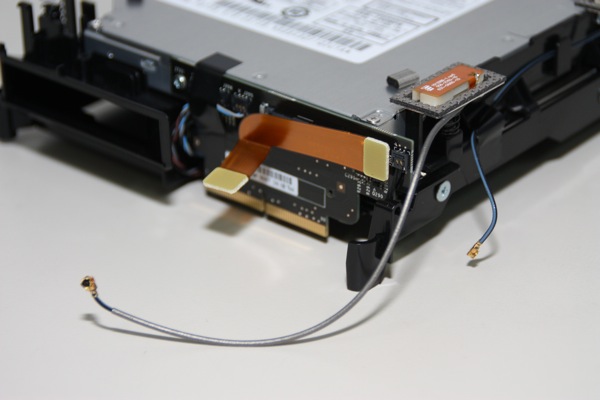 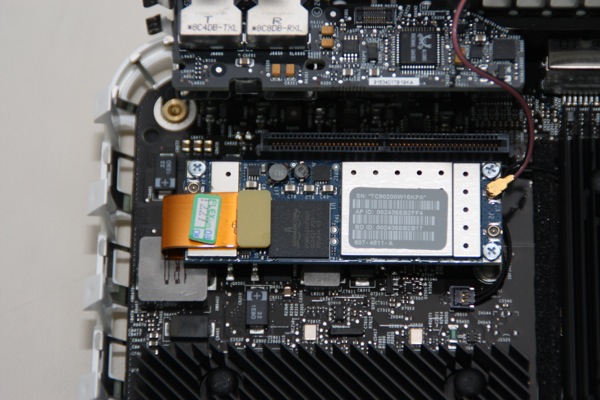 A full shot with the optical, the fan, and the hard drive removed. The RAM has changed orientation. (It used to be perpindicular to the front, but now it is parallel. 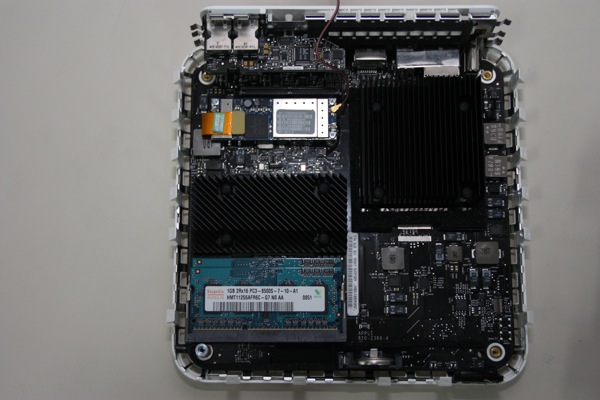 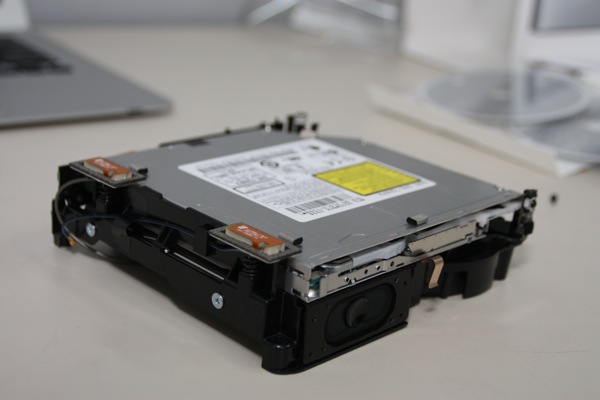 Three months ago, we published an article called The State of the Mac mini. In this article, we were the first the mention that the new mini would have a SATA optical drive, making it easier to have a second hard drive in it. It turns out that the optical drive is indeed SATA. (We also thought there would be a BTO option of replacing the optical drive with another hard drive, but we were wrong on that account. Personally, I think it's still coming as an option.) Here is the info from the optical drive. 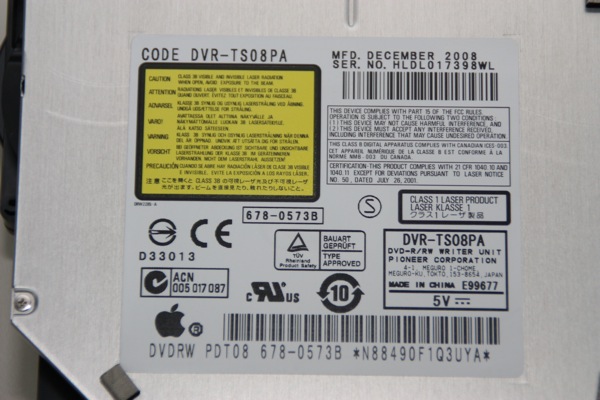 And the back of the optical drive and hard drive. 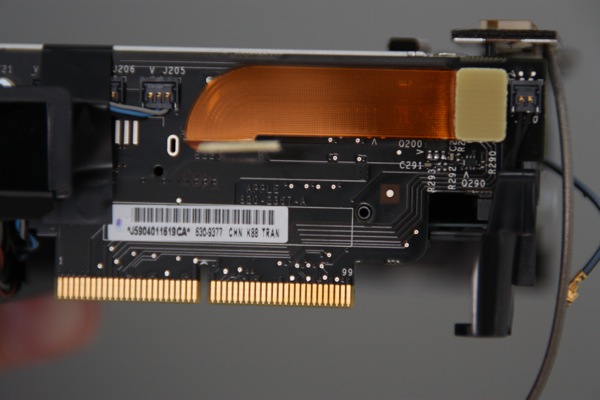 Well, those are the main parts of the new Mac mini. We're going to get right to work on benchmarking this Mac mini in server performance. The last version was solid and performed well. With the extra RAM (at a faster speed), and the larger hard drives, these Mac minis should make even better servers.

If you'd like to keep up on the benchmarks, keep up with us on twitter here. Also, if you are able to spot anything from the pictures that can be added, please send us an email or a message on Twitter. About Macminicolo
Macminicolo, a Las Vegas colocation company, has been hosting Mac minis since their introduction in January 2005. They are the leaders in this niche market and are known for their personal service. They currently host hundreds of Mac minis for satisfied customers located in 36 different countries around the world. Get more info on our frequently asked questions page.